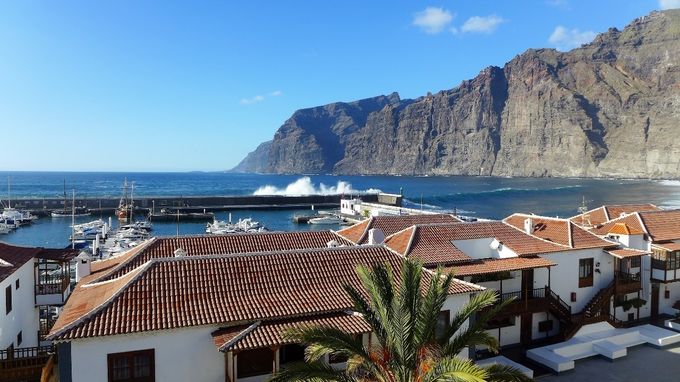 My first reluctant visit to Tenerife was in 1976. I soon was convinced that this was the ultimate hiking destination. After making many visits to Los Christianos and Playa de las Americas in the years until 2001 i choose to try Los Gigantes the year after. I had searched for trails that were easily accessible from the hotel without great success. This changed radically when I came to Los Gigantes. Alone and with friends I have explored Los Gigantes and the nearby Tenomountains every year since. Almost every year I have found and explored new exciting trails and areas. In the first few years I had two weeks stay in the area, but since 2010 I have spent 2 months there every year. People I've taken walking are fascinated by the spectacular scenery that hides wihtin Los Gigantes steep cliffs. I have no wish that there will be any mass-wandering on the partly demanding paths and trails of  the Tenomountains. Nevertheless, I think that some more should experience this hiking paradise.

This website describes the walks I have developed for the public, from fairly short and easy trips to the long and very demanding. Most of the hikes start and end in the village of Los Giantes and can be carried out without the use of vehicles.

The up to five hundred meter tall, and almost vertical, Los Gigantes cliffs make up the Tenomountains southwest boundary, as the clifs meet the Atlantic Ocean. The nearest mainland to the west is North America, a few thousand kilometers away. The Tenomountains eastern boundary is made up of the northnortheast going Tamaimovalley with the main road between north and south, C820. To the north, the area is bordered by a relatively flat area with the small towns of Buenavista del Norte, Los Silos, Garachico and the road TF 142. Here the north Atlantic ocean continues more or less unbroken by mainland to the North Sea. The Tenomassif is not large, an irregular triangle of approx. 25 x 15 x 30 km. What it's missing in size is to a great extent made up for in content! The highest point is the Pico de Gala with its 1354 asl. From here is a ridge going west north west, and roughly divides the Tenomassif in two, making up the watershed. Here you can really talk about watershed. The humid air in the prominent northeastern winds leaves most of the rainfall on the north side. It is almost jungle in much of the northern Teno area, while on the southwest side it is more like a semi-desert. From the west north west going ridge there are deep, wild valleys and gorges going both southwest and north-northeast. Barranco is the name of everything from narrow valleys to real canyons. The barrancos in the Tenomassif are eroded from running water. The volcanic rocks are, with few exceptions, soft and easily soluble. A once much more humid climate gave heavy rainfalls with large streams of water running towards the sea forming a spectacular landscape.

The Canary Islands were once the hub for the last stone-age communities in the western world. There was no metal available and the whole culture was based on what nature could provide and the techniques the indigenous people had developed to exploit these resources. In Tenerife, the indigenous people were called Guanches. Eventually this has become the common name of the indigenous peoples of all the seven islands in the archipelago. There are indications that the Guanches existed 2500-3000 years before Christ, but they may also be much older. Different sources, from long before Christ and until the 15th century, describe the Guanches as a happy and noble people, with high moral, lively, strong and with great respect for humans and especially women who seem completely like with men. They gladly sacrificed their lives to defend their territories and demonstrated incredibly bravery and struggle against the Spanish concquistadors who conquered the Canary Islands during the 15th century. Tenerife was the last of the islands that was concquered by the Spanish crown. During the first attack against Tenerife in 1493, 300 Guanches managed to kill 900 Spaniards. This inspite of the Spaniards having firearms against the Guanches rocks, clubs and spears. In the next rally, the Spaniards managed to get the Guanches out on a plain, and then they were a light mach for the firearms. In 1494 Tenerife became the last of the islands subject to the Spanish crown. There is a lot of literature about the Guanches, so I will not spend so much space on history.

I will though mention that it`s still considered a mystery how the indigenous people came to the Canary Islands. No traces of seagoing vessels have been found, but there seems to be unanimity that they originate from the same peoples as the North Africans. There are similarities between Libyan language and Guanches. Some have wondered about a highly developed society in the Atlantic Ocean that existed at least 5,000 years ago. This is linked to the Canary Islands. A major natural disaster caused Atlantis to be destroyed and sink in the ocean. Perhaps the Guanches were survivors from the lost Atlantis?

This is enough history from my side. What is important in this hiking guide is that through the thousands of years the Guanches had the islands left for themselves they developed some amazingly exciting trails!

I have walked in untouched nature in the Tenomountains and come across remains of human activity in the form of paths, terraces and caves used as dwellings. Often I've wondered what in the world they had here to do? There has been a sliding transition from Stone Age to modern times and assimilation to Spanish culture in Tenerife. The Spaniards claimed that they had wiped out all the "savages," but several historians and ethnologists have returned this. Many Guanches escaped in the mountains, where they settled and  slowly but surely adapted to a changed reality. Many of the "Official" tourist trails today follow old paths that are very elaborate with high walls made up of rocks.

There are written a number of hiking guides for Tenerife in different languages, also Norwegian, I do not know how many. This guide deals with what I consider to be the most spectacular and challenging trips in the Teno Mountains, most of them are "unoffcial", ie they are essentially on trails not marked by the tourist authorities, some of them are not on the maps and many of them are hardly previously described in any tour guide. The majority of the tours start in Los Gigantes, either with the "Cliff  path", a path that is expressly signposted to be temporarily closed (it has been so in all the 15 years I've been here!) And that the authorities disclaim any responsibility for any accidents. Another entry route to the area is "Camino Rejale," - King's Road - up the Tamaimovalley. This is an official, well-marked and highly-trafficated path. If one stayes in the Los Gigantes area (and Puerto Santiago, or Playa de La Arena). One can via  the two mentioned trails reach large parts of the Tenomountains without having to resort to a car or bus. Where possible and naturally, the walks are described as round trips, so that one to a small extent goes the same way back and forth.